An Opportunity to Invest in a New Economy

We make a difference in the world, by how we choose to invest our philanthropic dollars and/or investment funds.

We know that you know that we face planetary catastrophe if we don’t change the way our economy works today — we need to divest from those activities that are causing harm to the earth, and invest in ones that are restorative and regenerative. Whether you’re talking about large amounts, such as endowment funds of Ivy League universities, or the charitable donations you make at the end of the year, you know that moving from unsustainable practices to restorative and regenerative ones is what’s needed to reduce carbon in the atmosphere and put it back into the soil where it literally sustains life.

Our nonprofit, the Center for Regenerative Community Solutions (CRCS), is at the forefront of the effort to transform our economy into one that creates sustainable prosperity for everyone. Buckminster Fuller was amongst the first to recognize that we are technologically capable of producing a world that sustains everyone, and that gives us the opportunity to heal our planet, our psyche, and our civilization.

END_OF_DOCUMENT_TOKEN_TO_BE_REPLACED

Our Work and Its Value to You and Your Community

NJPACE Launching a Coalition for PACE in New Jersey

In the wake of Governor Christie’s conditional veto of A2579/S1510, New Jersey PACE is initiating a coalition of key players to:

(a) resolve any issues standing in the way of a new, comprehensive, and workable bill — acceptable to all constituencies, insofar as possible — that initiates the development of a robust and secure PACE industry, and

(b) develop an industry alliance that helps expand the program to all sectors and all corners of the state.

END_OF_DOCUMENT_TOKEN_TO_BE_REPLACED

A paper entitled “Global 4C: World Monetary Union for Climate Change Mitigation,” by Delton B. Chen, Jonathan Cloud, Joel van der Beek, has been posted to the site of the 2015 Earth Systems Governance in Canberra, Australia, December 14-16. Focusing on the potential for using an innovative method of financing carbon mitigation and sequestration, the paper examines the basis for addressing economically the multiple challenges facing the planet, and the underlying causes of the failure of markets to incorporate the “externalities” that are now beginning to harm all of us.

As the paper notes at the outset,

“The future viability of our civilization is in serious doubt because of Anthropogenic Global Warming (AGW) [3][5][6], chronic degradation of ecosystems [9][30][45], and risk of nuclear war [64]. These harms and risks are related to unchecked economic growth, fossil fuel usage, resource consumption, and militarization. Civilization is evidently in need of systemic change to avoid collapse and to build restorative networks [50][52].”

The paper offers a more complete economic framework for environmental management, and a new public policy for climate mitigation that has not yet been considered under the United Nations Framework Convention on Climate Change (UNFCCC), and was not discussed at COP21 in Paris. The paper offers a roadmap to strong decarbonization of the global economy, even when orthodox policies are unable to deliver due to political delay.

The ESG conference, subtitled ‘Democracy and Resilience in the Anthropocene,’ is the 6th in a series of conferences on Earth Systems Governance, aimed at fostering “a better understanding of the vital questions of legitimacy, accountability, transparency, and democracy” in finding a way to be responsible for the vitality of a living planet. Previous conferences have been held in Amsterdam (2009), Fort Collins (2011), Lund (2012), Tokyo (2013) and Norwich (2014).

The Global4C proposal, for which CRCS serves as policy host, will be featured as part of a panel on “Green Economies, Consumption & Growth.”

Conditional Veto of PACE Bill a Temporary Setback for Program

On November 9, four months after the PACE bill (A2579) passed the NJ Legislature with bipartisan majorities, Governor Christie’s office issued a “conditional veto,” limiting the program to a “pilot” with a maximum of ten towns, and excluding any town that has received Transitional Aid or other special assistance in the last three years.

Initially we thought we could live with such a program, but after reviewing the Governor’s conditions in detail, we realized that these were provisions that could ultimately prevent the program from being successful, and would also likely forestall the introduction of a new and improved bill as soon as possible. We’re still looking at all the options, and we’ll be posting at NewJerseyPACE.org  the public statement we plan to circulate at the League of Municipalities Convention this week.

We are of course disappointed by this setback, but we will continue to provide an undiminished effort to bring a viable PACE program to the state of New Jersey.

Examining the Future of PACE in NJ Municipalities

As part of this effort, we’re scheduling a webinar on “The Future of PACE in NJ Municipalities​” on Tuesday, December 15, from 11 a.m. to noon in order to provide ​municipal officials with sufficient information to consider becoming involved in the effort to make PACE viable in NJ. ​RSVP for the webinar to Victoria Zelin at vzelin@newjerseypace.org​. Stay tuned for ​more such events and updates, and contact us if you have any additional questions.

Our sincere thanks to all those who contacted the Governor’s office to ask him to sign the bill.

Our main focus at this point is building out New Jersey PACE, an open-market platform for commercial PACE deals anywhere in the state. The critical amending legislation (A2579/S1510) passed at the end of June; we are now waiting for the front office review and the Governor’s signature. In the meantime we reviewing and revising parts of our web presence to make them more accessible and self-evident. We anticipate a significant backlog of projects once the law is signed, and we want to make the process as easy as possible for everyone to understand and implement.

At the same time, CRCS as an engine of change is continuing to evolve new projects – some our own, built on or around the PACE model; and some from others, such as Dr. Delton Chen’s Global4C project, which is attracting worldwide attention. We’re gradually getting into various models of “fiscal sponsorship” for organizations and projects that we see as compatible with or related to our mission. In most cases — such as our Regenerative Cohousing initiative — our goal is to bring these projects in-house, under our own umbrella; but in a couple of instances we may support fledgling organizations until they get their own IRS exemption.

Finally, we’re exploring further opportunities for individuals to profit from the transition to renewable energy — from the bulk purchase of green energy, the installation of solar with no upfront cost to the property owner, to the use of PACE in underserved communities and distressed neighborhoods. Stay tuned.

After 3 years of working to bring PACE to New Jersey, and close to a real launch, we have scheduled The New Jersey PACE Summit – the first of its kind event for PACE in NJ. We are seeking Founding Sponsorships and Event Sponsorships, a schedule of which you can view at NJPACE-Sponsorship.

From the Sponsors’ perspectives, they’re passionate about being able to award dollars for something they believe in and want to support, while gaining recognition and acknowledgement far beyond what they could get through paid advertising.

Our goal in recognizing our Sponsors is therefore to convey something significant about them, and about their support for us.

Our first Founding Sponsor is an out-of-state company — MSL Group — that’s been doing PACE projects in other states. It’s ironic, perhaps, that no local company or firm would jump into the water as a Founding Sponsor. But it’s an indication of what energy services firms who are operating in states where PACE is thriving, know, that NJ firms don’t yet know: that PACE is actually as good as it sounds, for every stakeholder.

END_OF_DOCUMENT_TOKEN_TO_BE_REPLACED

The theme of this year’s New Jersey PACE Summit is “PACE: what’s possible for New Jersey?” The subtitle gives part of the answer: “Resiliency • Clean Energy • Jobs”— these are the major elements of the story, that will be explored at the conference. And there’s more to it as well — PACE can provide regenerative community benefits, support new technologies, and foster new approaches to the global challenges of our times.

END_OF_DOCUMENT_TOKEN_TO_BE_REPLACED

There is a featured article today on the editorial page of the New York Times about how cohousing might be a desirable option for single people. It ends, though, by saying: “. . . homes that combine privacy with community and sociability . . . that combination sounds pretty attractive for anybody . . .”

The article should have mentioned that there is no such option, yet, in the whole New York metropolitan area! That’s why we’re confident that, if we can get our ecovillage built, there will be considerable demand to purchase units and become part of such a unique community.

Here are excerpts from the New York Times article:

While many single people are quite happy to live alone, it’s not always easy. When Kate Bolick first lived in her own apartment, she said, “it felt unbelievably exciting to be simply living by myself and master of my own domain. But then maybe at around the seven-year mark it started to feel kind of repetitive and lonely.”

END_OF_DOCUMENT_TOKEN_TO_BE_REPLACED 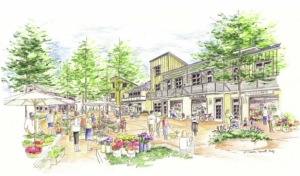 While we’re working hard on what we expect to be an avalanche of PACE projects once the new law is passed, we’ve been giving serious consideration to where and how we might want to live during this next few years of our lives. Like many others in our age group, we’re officially “empty-nesters,” and are looking to live “more lightly” on the land. We’d also like to be part of a genuine community, where we have deeper relationships with our neighbors, and can work together to bring about more rapid social change.

This has led us to a growing interest in intentional communities, ecovillages, and cohousing. The most practical and least controversial of these is cohousing, where a small neighborhood of 10-35 families share a large common facility, and live in smaller-footprint individual homes around this common space

Cohousing itself is not new; pioneered in Denmark in the 1970s, it was introduced into the U.S. by Kathryn McCamant and Charles Durrett more than 35 years ago. There are more than 700 cohousing neighborhoods in Denmark today, many in other European countries as well as Australia and New Zealand, and close to 150 in the United States, with another hundred or so in various stages of development.

New Jersey is something of an anomaly in having no completed cohousing developments. In our view there is considerable interest and potential for development. And it is a uniquely appropriate vehicle for the kinds of “regenerative community solutions” we are seeking to introduce to NJ communities in the wake of Superstorm Sandy.